Flamingo is the common name of the six bird species of the phoenicopteridae family that formed the genus phoenicopterus. It consists of one genus and its six subspecies. Another feature of this species is that they are called Cuba because they can reproduce in itself and with other species. It has long thin legs, long and curved necks and feathers in tile-colored tones. The red tones in their feathers are usually due to their eating. The species that live in areas with low carotin content in their food are lighter in color. Since the offspring and young species receive less amount of carotene, their feathers are white.

Where does Flamingo Live?

Flamingos are found in Africa, South West and Central Asia, Central America and Southern Europe. Rose Flamingo is seen in Spain and Southern France at the time of incubation. This species is between 125 to 130 cm in length and lives in Asia, southern Europe and Africa. In a region between the Netherlands and Germany, a colony of flamingo species lives and is the northernmost colony in the world. Flamingos live in very big communities, in areas with unusual natural conditions that other animal and bird species do not prefer to live. For example, they live in salt lakes, lakes with great stagnant water and lagoons. In short, this bird species can withstand difficult living conditions. Their number can reach about a million in their environment.

What do Flamingo Eat?

In general, Flamingos eat animals such as crab, artemia and shrimp but they also feed on ant larvae and algae. They can easily reach their food even in the most difficult conditions thanks to their downward curved and thick-tipped, sturdy beaks.

Another curious feature about flamingos is their color. The condition that causes them to have pinkish colors is the foods they eat. Flamingos eat foods with a high carotenoid ratio; the pigments contained in this substance pass into your body and feather. In addition, flamingos produce an oil with a high carotenoid ratio, which makes these tones more dominant. Courtship is vital for this bird species. Because it is monogamous and incubates on only one egg. Thus, it will be more interested in its offspring. It builds a nest made of mud to protect its single offspring. Flamingos, like owls, are one of the longest living bird species; flamingos can live up to 70 years. This bird species makes great sacrifices while grow its young. The offspring are gray when they are born, their color becomes pink as they grow but the color of adult flamingos fades.

This site uses Akismet to reduce spam. Learn how your comment data is processed.

These birds feed on diatoms, algae and invertebrates like mollusks and crustaceans. Their diet is mainly responsible for the pink colour of the birds. Sometime in zoos food colouring is used to retain the birds natural colour.
Since flamingos are a vulnerable bird species, they usually fly at night and prefer deserted areas to reproduction. Over a period of about a month, the offspring begin to hatch. A newly hatched Flamingo puppy is gray and almost a duck - sized. Offspring are fed by their parents until they are two months old. At the end of 100 days, they have the capability to fly and set up separate communities. There are those who lay eggs every 3 to 4 years, as well as those who lay eggs every year.

Scientists are not sure why they are standing on one leg. If the bird keeps its leg close to its body, it loses less heat than its leg.

Range of the Flamingo Colors Facts 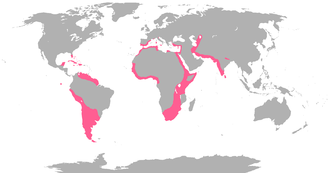 383 Total Animals,Do a search of animals and animal species, to learn more about animals

Flamingo Flamingo is the common name of the six bird species of the phoenicopteridae family that formed the genus phoenicopterus. It consists of one genus and its six subspecies. Another feature of this species is that they are called Cuba because they can reproduce in itself and with other species. It has long thin legs,

Fossa The scientific name of Fossa is Cryptoprocta ferox and are carnivorous mammals native to the island of Madagascar. They have many similarities to cats but in fact they all belong to the family of Madagascar carnivores that are unique to the region. They are the dominant predators on the island because there are not

Ankylosaurus Ankylosaurus is known to have lived in Western North America 68-66 million years ago. Ankylosaurus are four-legged, herbivorous dinosaurs. These are characterized by armor made of bone plates. They appeared in the Middle Jurassic but when they reached a worldwide distribution, they summited in the Cretaceous period. The oldest finding of these animals was